The Strength Coach and the Newbie Part 1.

The Newbie approached the Strength Coach and asked "Is it possible to put on muscle and lose body-fat at the same time?" to which the Strength Coach replied "Sure it is!"
"OK - Can you tell me how to do it?"
"No problem, but it's kind of a secret - before I tell you I need you to do a few things..."
"OK...."
"First of all I need you to back-squat heavy at least twice a week"
"Is that all! No problem - I can do that!"

A few weeks later the Newbie comes back to the Strength Coach and says "I did what you said, I've been squatting heavy twice a week. Can you tell me the secret to putting on muscle and losing fat now!?"
"Nearly, nearly....There might be just a few more things I need you to do first. Firstly I want you to eat at least 6 servings of vegetables per day, 5 meals a day and have a protein food with each meal. Eat plenty of food...but make sure it's all natural, whole and unprocessed stuff!"

Another couple of weeks go by and the Newbie approaches the Strength Coach: "Mate - so much for all your 'secrets'. I've been putting on muscle and losing fat for quite a few weeks now...looks like I don't need your advice after all!"

This too shall pass...


It compels us to live for the moment, to not treat life like an ever retreating mirage that is always two steps ahead of us.
To live the shit out of life because all will pass and we must live the moments of joy, and experience the wonder of life now, for soon any moment of wonder will be a memory.


The phrase appears in the works of Persian Sufi poets, such as Sanai and Attar of Nishapur. Attar records the fable of a powerful king who asks assembled wise men to create a ring that will make him happy when he is sad, and vice versa. After deliberation the sages hand him a simple ring with the words "This too will pass" etched on it, which has the desired effect.


It was not long ago but perhaps the details are hazy...I've never been one for remembering the details, but for feeling the intent and the emotion...
I was with my wonderful friend in one of my last days in Vancouver. Simply doing what we do and chilling, talking and spending time with her equally wonderful family.


We went out to get some sushi for dinner, and whilst waiting in a nearby park for our food to be ready she presented a package which enwrapped a ring, beautiful in it's simplicity and with the equally simple inscription...

This too shall pass 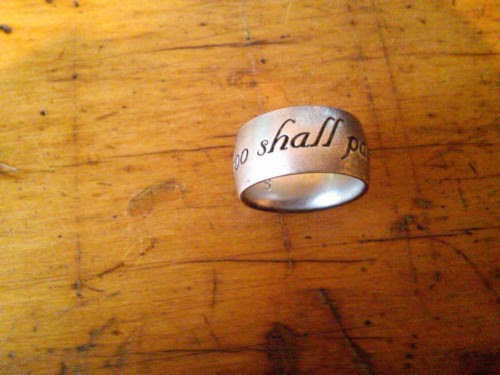 For more of the beautiful work of Melissa Lawrence of M3 Designs go to: www.m3designs.com

The Finger Pointing to the Moon

I have been fascinated by religion and spirituality ever since I was a child. I was always also fascinated by science, and at least when I was young I never really saw why there was such a divide between the two.

But in spite of an upbringing (or perhaps as a result of an upbringing) in which I was exposed, but never expected to practice or adhere to, many spiritual traditions and religious tenets I became through my teenage years extremely anti-religious.
I could see that so much evil had been perpetrated in the name of religion. I reviled at the literal interpretations of what appeared to me to simply be myths and legend and most of all I reviled at the absolute rejection of all that was not in one's religion and the exclusion of people who had done nothing wrong, to the point of hate.

Over the years though I began to see that what I was repulsed by was dogmatism and extremism, and this occurs in the most modern of religions - science - every bit as much as the theist tenets.
Religion in and of itself is not the problem. As with any system there is one simple fault - and that is greed.
Greed drives the hunger for power, the hunger for 'things' and the hunger that is perhaps the most powerful - the desire to be right.


But if we strip away the desire to be right, if we strip away extremism and dogmatism we are left with in religion, simply a set of devices; tools by which people can begin to connect directly with that which is greater than us.
If we agree (and I'm not expecting you to agree with my interpretation) BUT if we do agree that there is something more than us - call it universal energy, the divine, the super-conscious, God or simply LOVE, and  that we are ultimately and intractably connected, then how we connect, how we begin to actually realise that is of some importance. And the experience of the divine can only be experiential. We cannot understand quantify in it's entirety the greater power that we have as human animals, the power of self-belief and most importantly the power of universal energy. To seek to do so is analogous to a cell in your body seeking to comprehend the entirety of your being. That cell is an intractable part of the whole, it is a facet of your own personal super-conscious. It feeds into, and is in turn fed by this consciousness, but on it's level the greater is unable to be comprehended.

People seldom realise the value of a moment. They seldom are able to have a moment of simply being as one with all. That experience - often called the 'direct experience of source' need not have any conduit to it. It may be spontaneous, it may be something achieved through simply being, or through the arts, or science or loving relationships, or simply watching seagulls drift across the sky. But those moments do often come through the tools we use to connect; the tools of prayer, meditation, contemplative exercise and other religious or spiritual devices. So why throw out the baby with the bathwater and reject wholly the valuable aspects of religion and spiritual traditions when the problems actually arise from the actions of greed?
They are not the moon - they are simply the fingers pointing to the moon.

Because I sit a certain way or I chant a certain word, or because I call that consciousness that we all share a particular name does not make my way right; it simply means I have found a way that makes sense to me - a path that resonates with my history, with my conditioning and that melds itself into my personal legend.
That path may change, it may shift, but in the experience of source one can only realise that all paths lead to the same place. It is then that devices seek to have importance and there simply is the man and the way and they are one.
Posted by Cliff at 2:50 pm No comments:

The Value of Play

by Arthur Saxon (arguably the strongest man to have walked the planet).
In this book he outlines some of his training, nutrition and exercise methods (all from the early 1900's I must add) and one thing that struck me was how much of the training that he and his brothers (also famous strongmen) did was basically play.
They would go into their private gymnasium and 'play' with barbells, dumbbells, kettlebells and Indian clubs, along with other heavy objects, for hours on end, fueled all the while by what could be one of the first sports drinks - heavy cream, stout and sugar!

I have seen the value of this approach to my training, and whilst a more structured approach is beneficial for a large part of our training, one cannot underestimate the importance of simply walking into your gym, backyard or garage with no preconceptions and to simply try out new exercises and feats of strength, and do it all with joy and non-judgmental compassion for self.

For example; I don't usually train on a Sunday, but yesterday I felt like I wanted to PLAY.
So I grabbed a 24kg kettlebell and went outside in the sun and had a great old time. I had no preconception of exercise, reps or sets. In fact that is the beauty of occasionally training on an 'off' day - you need not worry about pushing yourself to your prescribed volume and intensity and can simply do it for the love of being active, healthy and strong.

I worked through a variety of fun exercises, from bell up snatches to bell up clean and presses, into a variety of cleans, snatches, single bell clean/press/tri extensions, single bell curl and press (high reps), swings with a pause at the top (brutal!) and full overhead swings. I finished it all off with some of my favourite shoulder/core strength/mobility drills: KB orbits from the waist, 1/2 orbits (behind head) and full orbits.

"Life should be a playfulness not a purpose..."
~ Osho
Posted by Cliff at 9:22 am No comments:

Sweet intoxication
When your words
Wash over me

Whether or not
Your lips move
You speak to me

Like an ocean
Without waves
You're the movement
That I crave