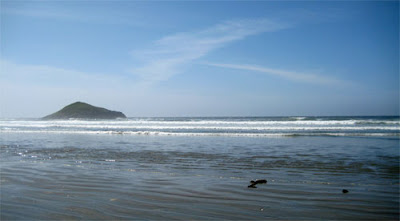 Sitting in the surf yesterday (my first in two years) I was thinking about several epiphanies/metaphors for life that I have experienced whilst surfing...

Now don't get me wrong, I don't consider myself an expert in the waves, but off and on for the last 20 or so years I have spent a fair bit of time in the water, most of it on a long board; and I've been lucky enough to surf some great breaks and some beautiful locations in New Zealand, Australia, Brazil, Uruguay, Peru and now in North America.

Surfing Long Beach, Tofino on Vancouver Island was something that I had been meaning to do since I arrived in Canada nearly 3 years ago! And, apart from the occasional jaunt home to New Zealand I haven't been in surf since I got here!

Tofino itself is a really cool little place. It would be very easy to lament the growing numbers of tourists, the inflating prices and the loss of the original 'small town' vibe; but all you need do is look across the water to the ramshackle house boats, the beautiful inlets and forest laden coasts seemingly flowing into the water as the water flows to it's edge to be reminded of what a special place this part of the country is.
It was a little different to be getting all wrapped up in booties and hood to go surfing....as some of you will know I most often like to surf in simply boardies, and look fondly back on some of my favourite days bare backed sitting on a long board out the back in Costa Azul and Floripa....But everywhere is different and getting into the cool waters of the Pacific North West on a nearly deserted beach on a cool and overcast morning was something special and something that felt (at least to this humble observer) archetypally Canadian.
[Thanks to the crew at Long Beach Surf Shop for sorting me out with a board and wettie for the day.]

So here's what surfing has taught me:


1. It doesn't matter where everyone else is....what matters is where you want to be...
So often in the surf...and in life we 'follow the crowd' and go to where everyone else is. We expect that others know better than us and that by being where everyone else is we will be in the best place to pick up great waves (opportunities).
But often the crowd started with just one person going to a particular spot on the beach, and another going to the same spot and then everyone else just figured it was the best place to be.
Now it may be true that someone or a group have some inside or 'local knowledge' so of course it's valuable to take note of where people are and to watch how the waves are breaking and what's going on with the conditions, but there have been many, many times when I have taken the option of an isolated beach break over a crowded one and have been rewarded with my choice of great waves.
Remember also that a good spot for someone else is not necessarily the best for you and is dependent on not just the quality and type of the waves but also on your skill level and your needs and wants...

2. Catching a great wave is often better than waiting for the 'perfect' wave.
Procrastination rules many lives....and often in the water (and of course in life!) we try to position ourselves to wait for, and do end up waiting for the perfect wave or the perfect opportunity, and in doing so let a lot of great waves pass us by.
Life is determined by action and simply waiting does not accomplish anything. It is always better to do something, and do it well than to not do anything (simple eh!?)
Perfection too is a self defeating ideal. NOTHING in life can ever be perfect. We can strive to do our absolute best, and so in a way it could be said that we are reaching for 'perfection' but we must also be aware that we won't reach it...because it's impossible and to be prepared to satisfice at a level of achievement that makes us extraordinarily happy.
We often to define 'perfection' not in our own terms but in those of others. Catching our great 'wave' is a personal thing. Don't let those great waves pass you by!

3. Sometimes you have to let a wave (or several of them!) go...
Probably the biggest thing I learnt as I got older was that you have to let waves go...
So often when I was younger I would paddle hard to get out the back and then I would see a great wave and turn immediately to catch it, even though I was too tired to paddle hard enough to catch it. You end up exhausting yourself further, and on occasion stuck in a lineup of breakers that take a fair amount of paddling, duck diving (and if you're on a really big long board abandoning ship!) and battling to get out from. Patience is a virtue...and one leant with age!
Preserving ones energy, drive and verve, honouring, looking after and caring for oneself is something that we tend to not do as youth, and only begin when imperatives are thrown at us by the passing sands of time.
In business I learnt some time ago that not every opportunity should be seized and not every idea should be developed. Often it is just not the right time - you don't have the resources, the skills or the time and inclination to do it justice, and at those times, like when you're sitting out the back taking a break, it is better to sit, chill and restore so that when the time is right you can attack the right project with the attention and energy it deserves. [This is a topic I investigate in Choosing You!: How You Can Choose To Live The Life Of Your Dreams...Right Now!

4. The wave is only part of the process...
I found myself for I think the first time, paddling out through a pretty heavy set (one of the only big sets of he day) and enjoying the grueling ardour of muscles paddling hard for the first time in a few years rather than simply wanting to be out the back waiting for a wave.
I hadn't even thought about this much before...
I'm a real 'journey is the destination' kind of guy right?......
But I realised that most often in the past I was wanting to be out the back, or on a wave and there were aspects of the 'journey' that I had a real aversion to.
The interesting thing is that so much of what feels great about surfing is the great workout that your body gets, the connection that we develop with the water around us, the energy of the kinetic force of the waves - all things that are encapsulated not just on the catching of waves, but in the journey to get there.
And out in the water I didn't think about this so much as just appreciate that every movement, every 'step' along the journey was a gift, a blessing and a joy in and of itself.

5. You've got to be humble in pulling off a wave....and humble in taking your wave...
In the surf as in life there is particular etiquette, and if a wave is not yours to take in some breaks around the world it bodes best for your wellbeing to pull off and let the other surfer have the wave!
Doing so humbly and without malice is a great exercise in humility - like bowing at a temple. Simply saying 'sorry' and 'thankyou' in this and many other moments in life is a surrender that brings us closer to source and removes the attachment to ego outcomes that so often handcuffs us.
However humbly taking your wave is equally important. If you are being dropped in on there is nothing wrong with holding your line and taking what is yours. It is not about possession or ego, simply standing up for yourself. I have seen many young surfers (and I have done this....) not taking waves because they are being crowded out by bullys in the water - even when it's clear that they were in the better position.

6. When it's time to go...it's time to go...
We all want to stay and catch that 'last wave', just as in life we often want to eek out every ounce of ecstasy, profit, windfall or whatsoever else is driving us along in a given moment.
But sometimes it is time to say 'enough's enough'.
There have been countless occasions where I have been getting cold and tired in the water and have wanted to stay for one last wave...and on catching that last wave in have though 'Maybe just one more...' and gone back out again in spite of the fact that my faculties are declining.
This can even be dangerous, as we get cold and tired our physical functioning is markedly reduced, but perhaps more importantly our cognitive function becomes drastically reduced too, and if we do happen to be at a break that requires some caution we could put ourselves at risk. In life too we can too easily stay too long and put ourselves at risk of the metaphorical rocks, reefs...and sharks that may beset us when we are not at our best....

And so en homage to my last point I will go....my compadres who are more accomplished surfers than I, I'd love to hear your thoughts on these, and other analogies from the water to life! Feel free to comment.